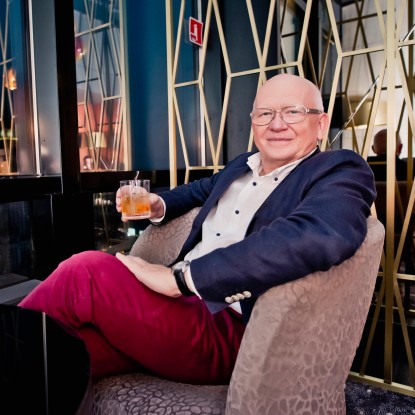 My name is Andrew Hulewicz and I am the owner of Mazurkas Travel. My whole life was dedicated to travel with desire to help others to find their own way to my own country, Poland. Today, after almost 30 years in the travel busienss I am proud to have a highly experienced team that share this passion.They will assist you to design an unforgettable journey accross Poland, help you to find a reason to visit Poland in every single architecture detail or a sound of music, in delicious taste of Polish cusine and hospitality We will deliver emotions that will become your own travelling story book.

The Pearl of Lower Silesia

Wroclaw - known as "Venice of the North" is one of the oldest cities in Poland. The capital of Lower Silesia with a beautiful location along the Odra River and its attractions, such as: the Gothic Town Hall, the Baroque Aula Leopoldina at the Wroclaw University or the Centennial hall, a UNESCO World Heritage Site. Wroclaw offers a wide variety of places to see and free time to enjoy in the Wroclaw Opera House, the Philharmonic Hall or during the Wroclaw Music Festival. Odra River also gives additional beauty with 200 bridges connecting different parts of the city. Wroclaw's fascinating history reflects also the past of the entire Central Europe and it does its best to benefit from this historical multiculturalism of the city like, for example, having the District of Tolerance, a small area shared by the houses of worship of four different religious denominations: an Orthodox church, a Roman Catholic Church, a Lutheran church and a synagogue. Finally, last but not least, it give the opportunity to meet with local people including 150 dwarfs that live in the city that you can try to look for while your visit to Wroclaw.

Wroclaw's fascinating history reflects the past of the entire Central Europe. One can find traces of the Polish, German, Czech, Austrian and Jewish cultures almost everywhere here. Wroclaw does its best to benefit from this historical multiculturalism of our city. That is the reason why Wroclaw encourage its western and eastern neighbours to join and engage in projects aimed to reawaken the curiosity that was asleep throughout post-war decades. The European Capital of Culture is a chance -  not only for Wrocław but for the entire Europe – to seize the opportunity to deepen integration in this part of our continent, to reconnect what has been apart for years, like having in Wroclaw, the District of Tolerance, a small area shared by the houses of worship of four different religious denominations: an Orthodox church, a Roman Catholic Church, a Lutheran church and a synagogue.

Take a private and romantic boat trip including dinner on Odra River to see the beautiful panorama of Wroclaw, especially in the evening to admire the illuminated monuments and historical buildings of the city.

The Church of Peace

While in Wroclaw take an excursion to nearby Swidnica to admire a UNESCO Site, the Church of Peace, the largest timber-framed religious building in Europe built in the former Silesia in the mid-17th century, amid the religious strife that followed the Peace of Westphalia. Constrained by the physical and political conditions, the Church of Peace bears testimony to the quest for religious freedom and is a rare expression of Lutheran ideology in an idiom generally associated with the Catholic Church.

The Taste of Silesia Lowland

The Silesian Lowland offers more than just their famous city Wroclaw itself. It takes about one hour drive to find yourself in the charming ambience of historical residences, splendid parks and gardens, a picturesquely located vineyards and fields of lavender. You can taste selection of local cheese coming from the local farm. Meet the local engraver and come back hope with Polish crystal. Sweeten your journey with the taste of local honey. The region of many tastes can be surprising.

Bolesławiec is not only one of the prettiest towns in Lower Silesia but also world famous for its time-honoured tradition of pottery making. Modern ceramic products from Boleslawiec, decorated using the stamp technique, are exported worldwide and constitute the symbol of the town. Here you can you can learn the history of stoneware, see how pots are made out of clay, and finally you can take up the challenge of making pottery yourself. During the tour we will visit a local stoneware factory Manufaktura that offers over 250 different products in over 150 patterns.

You will have a unique possibility to view the whole production process that has not changed for centuries. Tours and stoneware making workshops are offered by multi-lingual guides and artists.

Enjoy a guided tour of the interiors, such as: foyer with rich art collection, outstanding concert halls, technicians’ rooms which are not opened to the music public. You will also get to know the secrets of the innovative acoustic technics used while designing the building.